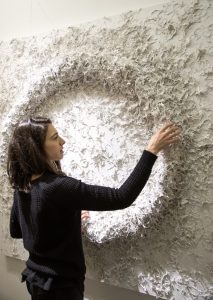 Maria Fragoudaki (b. 1983, Greece) was born in Athens and graduated from the University of London, UK in 2005. The New York based multidisciplinary artist engages a variety of visual languages such as painting, sculpture, dance and performance, to create narratives that are brought to life using materials that include feathers, rubber, tape, string, rope and paint. Inspired by the art movement of the 1960’s known as Process Art, her focus has gradually shifted from the use of paint to the material itself and how it interacts with space. With her choice of materials she has been investigating the concept of Haptic Perception, which is active exploration and relies on the forces experienced during touch. Using this concept as a starting point, and through her increasing interest in performance and movement, Fragoudaki is exploring the idea of feeling present, and is giving the viewer an experience beyond a passive visual perception of her work. Over the last year Fragoudaki has been focusing in finding ways to link her work till now with her increasing interest in performance and movement. She has transitioned from painting in one dimension, to later using layers to create depth and tools to give dimension, to recently moving towards sculptural paintings and sculpture. Throughout Fragoudaki’s process, movement has been a very important area of focus as has become more apparent on her recent work. She is currently working on her forthcoming solo show at the Jewish Museum of Greece and on two performance pieces that will be presented in New York in 2017. Maria Fragoudaki has presented her work in numerous group and solo shows throughout museums, art fairs and galleries in New York, Chicago, London, Miami, Basel and across Greece, including the Jewish Museum of Greece, Goulandris Natural History Museum in Athens, the Historical and Folklore Museum of Aegina in Greece, Scope Miami and Scope Basel in Switzerland. Since moving to New York in 2012, she attended three art residencies at the School of Visual Arts and worked next to Donald Sheridan, Andy Warhol’s master printer, as well as Andrew Ginzel a contemporary American artist known for his large scale public art projects and installations. Fragoudaki has exhibited at the Royal Academy of Arts in London (2016), Sikkema Jenkins & Co gallery (2016) in partnership with Visual Aids, Prak- sis gallery in Chicago (2015), WOP gallery (2015), Ca D’Oro gallery (2015), 103 Allen St. (2015), Luhring Augustine gallery in partnership with Visual Aids (2015), New Century Artists (2014), One Art Space gallery (2012), 4 N. Main Gallery (2012) in Southampton NY, and Kouros Gallery (2011) in New York. Her work has been acquired by private and corporate collections around the world.